All people Paul praised, made mention of and obviously loved. He tells us quite a bit about them in a few words.

First off Philemon. He wrote to him specifically, to beseech him, to plead for a favor.

He first reminds Philemon, that they labored together in the Lord’s work.

He told him he prayed daily for him, not for health or wealth, or safety, but that his sharing of the Gospel would be effective.

(If you care for me, I covet this prayer).

He had heard of his love of and faith in Christ, and was pleased at his sharing, that he was causing the Saints, to grow and be excited in their faith.

He had a teaching, not evangelistic ministry. He was reminded to give the glory to God for any good thing that was within him.

Then he brings down the hammer.

“Yet for love’s sake I rather beseech thee, I beseech thee for my son Onesimus, whom I have begotten in my bonds:”

He needed to plead to Philemon, because Onesimus, was once known to him.

Paul led Onesimus to the Lord, (in prison), as he apparently did Philemon. It is probable that Onesimus, was sent to prison, for doing wrong to Philemon.

Paul told him he was a changed man, that if possible he, Paul, would keep Onesimus as his own minister. (Helper in the Gospel).

Apparently, Onesimuses, prison time was over, so Paul begged Philemon, to receive Onesimus, as a fellow laberer, as a beloved brother in the Lord.

Paul, used his relationship to persuade Philemon. If he wronged thee, I will repay, place it on my account.

I won’t remind you how much you owe me. (Salvation?)

Bring joy to me, by doing this, I hope to be with you soon. I write to you knowing you will do more than I ask.

We find Paul, calling on behalf of a brother, to a brother.

He completes his letter, by asking Philemon to say Hay, to Epaphras his fellow prisoner and other, fellow labourers.

We can conclude that Philemon was at least in contact with the churches at Colosse, Laodicea, and in Hierapolis.

More to come on Epaphras.

Romans: 8. 35. Who shall separate us from the love of Christ? shall tribulation, or distress, or persecution, or famine, or nakedness, or peril, or sword? – Bible Offline

An oldie I love.

“The piano ain’t got no wrong notes.”
― Thelonious Monk

Psalm: 37. 23. The steps of a good man are ordered by the LORD: and he delighteth in his way. 24. Though he fall, he shall not be utterly cast down: for the LORD upholdeth him with his hand. – Bible Offline

No this is not about the Song of Solomon.

It’s not really even a song. It is a lament, a cry, a stirring of the soul.

A groaning, that cannot be uttered.

A desire that cannot be fulfilled.

A wound, that will not heal.

Yet; Understanding that, in Truth, I am:

FORGIVEN, I AM, BLAMELESS, MY SIN AND SHAME, IS AS FAR AWAY, AS THE EAST IS FROM THE WEST.

I AM COVERED BY THE BLOOD OF THE LAMB, I AM SAVED BY THE GREAT I AM.

The word of God, brings hope, that isn’t seen, causes faith to grow, opens the eyes of our understanding.

If Abram, at 75, began, his walk before the Lord, and became a friend of God.

If Moses, at 80, met the Trinity, walked in the ways of the Lord, and talked to the Lord, face to face like a man to a friend.

It is possible that Bill, at 64, in time, may be noticed and useful to God.

It is possible, a life has not been wasted.

The last, will be better then the first.

The future much brighter, than the past.

The Mountain, removed and the path made straight.

The Gospel of the Lord proclaimed, the lost, saved, the sick healed, the brokenhearted, comforted.

The Glory of our King Revealed.

“In the year that king Uzziah died I saw also the Lord sitting upon a throne, high and lifted up, and his train filled the temple.

And one cried unto another, and said, Holy, holy, holy, is the LORD of hosts: the whole earth is full of his glory.” 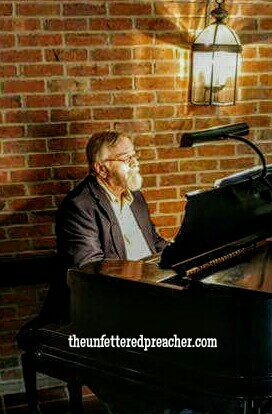 This is the one song, I wrote and remember. We were on the road, (“The Able Messengers”), set to visit a mens and a womans prisons.

“The piano ain’t got no wrong notes.”
― Thelonious Monk

“we like sheep have gone astray; we have turned every one to his own way; and the LORD hath laid on him the iniquity of us all.

He is despised and rejected of men;

a man of sorrows, and acquainted with grief: and we hid as it were our faces from him;

there is no beauty that we should desire him.

“For he shall grow up before him as a tender plant, and as a root out of a dry ground: he hath no form nor comeliness; and when we shall see him, there is no beauty that we should desire him.

He is despised and rejected of men; a man of sorrows, and acquainted with grief: and we hid as it were our faces from him; he was despised, and we esteemed him not.

Surely he hath borne our griefs, and carried our sorrows: yet we did esteem him stricken, smitten of God, and afflicted.

But he was wounded for our transgressions, he was bruised for our iniquities: the chastisement of our peace was upon him; and with his stripes we are healed.